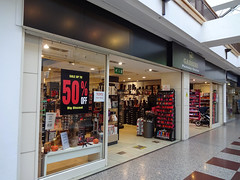 Bag, boot, makeup, and perfume shop on the lower level of the Whitgift Centre. It was previously based in Croydon Village Outlet, but moved here in August 2019 photo of notice.

The unit was previously occupied by a clothes shop initially branded as Republic photo, but after USC and Republic merged, it was rebranded as USC some time in September or October 2013 photo. It then closed down some time between December 2013 and July 2014 photo.

The space was used to house an exhibition during the June 2015 Croydon Heritage Festival.

Another clothes shop called Vintage Noir opened some time between August 2017 and August 2018 photo, but this closed down again by March 2019.