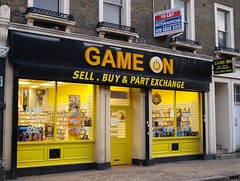 Video games shop (Game On) on George Street, with an employment agency (StaffBank) on the upper floors photo of entrance.

According to a photo on Flickr, as of c. 1990 the premises were occupied by Baxter Payne & Lepper, which was "one of the oldest shops in Croydon and [...] one of the first to have electricity".

StaffBank was previously at 219 High Street, but moved here some time between October 2017 and June 2018. According to a member of staff, as of December 2019 it had been in business for around 18 years.