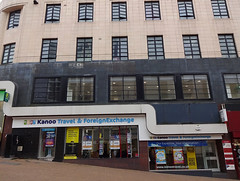 Travel agent, bureau de change, and Western Union money transfer at the Crown Hill end of Church Street (despite the address, which is a historical holdover from when it occupied more of the building).

According to a photo on Flickr, as of c. 1985 the premises (along with those of its neighbour Shoe Care) were occupied by a shop called Saxone.
Existence last checked in December 2019.
George Street/Crown Hill/Church Street ...