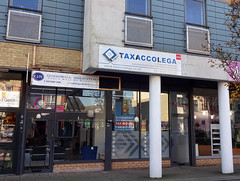 Solicitors office on the ground floor of Gary Court, on London Road.

As of December 2019 it's occupied by three businesses: Goodwill Solicitors, printing and design firm I You Print, and accountants Taxaccolega.

The left-hand part of the unit was previously a coffee shop called Gelattiamo photo, which opened in June 2015.

As well as coffee (and tea and hot chocolate), it also did salads, panini, cakes, and ice cream. There were a couple of seats inside and a few more outside.

Gelattiamo closed again some time between December 2015 and March 2016.

As of March 2016, this part of the unit was under refurbishment to open as a vape and coffee shop called Smoketronics photo. According to one of the shopfitters inside, this would be run by different people from the previous incarnation. It was open by the end of the month photo but closed again some time between March 2017 and June 2018.

Taxaccolega, which had previously been further along the same block at number 193b photo, moved into the right-hand side of this unit some time between May and December 2014, and by May 2016 it had been joined by I You Print photo. Some time between March 2017 and June 2018, the I You Print printing equipment was moved to the left-hand part of the unit which had been vacated by Smoketronics.