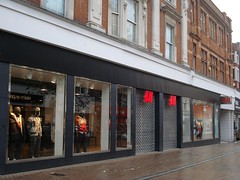 Clothes shop with frontages on North End (pictured) and in the Whitgift Centre photo.

The premises were previously occupied by Woolworths, which occupied the site for most of the 20th century after initially opening on part of the site in May 1912.

At the point when Woolworths opened, numbers 62-64 were the home of the Cinematograph Cinema (opened in December 1910). The Cinematograph was renamed to Palladium Cinema in 1915, and closed for good in May 1930, at which point Woolworths expanded into the premises. See photo showing Woolworths as of c. 1985 and another photo from 1989.

Woolworths itself closed along with the rest of the chain in January 2009 (see photos from the month of closing: North End frontage, Whitgift frontage). See Cinema Treasures entry for more detail.

According to an article on page 11 of the 15 May 2009 Croydon Advertiser, H & M opened on Thursday 14 May 2009, the day after its previous Whitgift Centre branch closed.