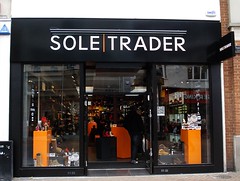 It opened in November 2012. Note that Soletrader previously had a branch a little further along North End at numbers 129-131.

According to a photo on Flickr, as of c. 1985 the premises were occupied by a shop called Jeanie.

It was vacant and advertised to let by December 2011, and remained vacant until August 2012, when shoe shop chain Soletrader were granted planning permission (ref 12/01834/A) for shopfront alterations at the site. Soletrader finally opened there in November 2012.