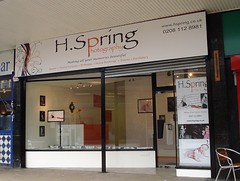 It was previously a photographic studio called H Spring Photography, but at some point this either moved or went online-only.

By 1968 the premises were home to a model shop called Model Time (see advert in Airfix Magazine), and according to old phone books this remained until at least 1984.

By July 2012 the unit was occupied by a PR firm called Sparkle PR photo; this moved away some time between October 2012 and early 2014.

As of February 2014 it was being renovated photo to become a photography studio called H Spring. H Spring Photography opened in March 2014. At some point this either moved or went online-only. We aren't sure when this happened; the last time we saw it definitely open was in May 2016. In any case, the premises were definitely vacant by October 2018, along with the rest of this block, due to impending redevelopment.