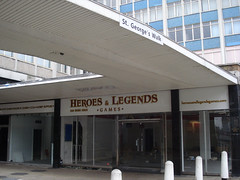 In 2016 it was used temporarily for a photo exhibition.

It was previously occupied by a games shop called Heroes & Legends photo, specialising in miniatures and collectable card games (e.g. Magic). This opened on 15 September 2012, but according to a post on their (now-deleted) Facebook page it closed down in early November 2014.

Before Heroes & Legends opened, the space had been empty for a while photo; prior to that it was a beauty salon called Dynamics Hair & Beauty.