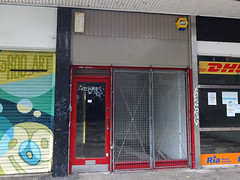 It was previously a candle, incense, crystal, and book shop called either Incensed (UK) Ltd or Powerful Hand, but this was forced to close in August or September 2018 due to redevelopment of the entire block. It appears to still have a branch in Brixton, though.

By May 2012 it was a clothes shop called Penny Blue photo. We aren't sure when Penny Blue closed; the last time we saw it open for definite was in fact in May 2012, though the signage stayed up into 2013 and it's possible the shop itself did too, just with restricted opening hours.

A Brazilian/Portugese cafe/deli/grocery shop called Lusitano Stores photo opened in December 2013, but closed down again some time between April and September 2015; as of late September 2015 the windows were all newspapered over photo, and this remained the case until at least December 2015.

As Lusitano Stores, there were a couple of seats inside, and four more outside (underneath the overhang, so sheltered somewhat from the weather). A counter at the front offered various types of chorizo, plus savoury snacks such as mini beef patties, fish cakes, and coxinhas (chicken rissoles). At the back was a grocery section with things like baked goods, herbs and spices, dried beans, cheese bread mixes, and frozen seafood and other items.