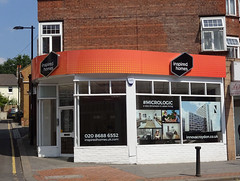 Business premises on the High Street, vacant as of October 2019.