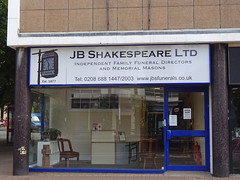 Funeral directors on Wellesley Road. It was previously located at 67 George Street, but moved here in early 2018.

The premises were previously a branch of Swinton insurance brokers photo, but this closed down some time between March and July 2017.

It was vacant as of July 2017 photo, and still vacant as of October 2017. As of February 2018 it was being fitted out for funeral firm JB Shakespeare, which was moving here from 67 George Street. This move was complete by June 2018.