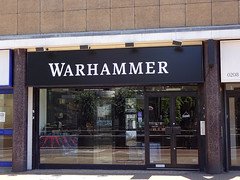 Games shop on Wellesley Road. It was previously branded as Games Workshop photo, but rebranded to Warhammer in late 2018 or early 2019.

As of July 2012 the Wellesley Road premises were vacant and advertised to let, with signs in the window indicating that at some point it had been occupied by a Relief Fund For Romania (RFFR) charity shop and markings on the frontage indicating that before that it was a branch of Bang & Olufsen photo.

Games Workshop was previously located in Centrale, with a frontage on Keeley Road photo, but moved to Wellesley Road in October 2012.