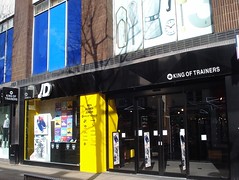 Sports clothing shop with frontages on North End (pictured) and inside the Whitgift Centre photo.

It opened in early 2012. It sells sport-related fashion and trainers (the chain is also known as "King of Trainers").

The premises were previously occupied by USC, who had vacated the building by December 2011 photo.