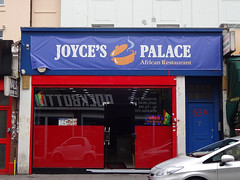 African restaurant on London Road. It opened in late 2018.

Accessibility: A step to get in. Toilets not checked.

See The Past and Present of Croydon's London Road for history up to 2015, at which point it was an electrical goods and lighting shop called ABM photo.

Some time between March and August 2017, ABM moved to Unit 1, Coomber Way Industrial Estate, CR0 4TQ photo of notice. (According to the Croydon Advertiser, the move took place in July 2017 and was due to a need for more space.)

The premises were vacant as of August 2017. Still vacant as of early November 2017, but there was shopfitting work going on inside. By June 2018 it was open as an African grocers and butchers photo, though there was no name on the frontage, and according to the staff it had no name other than "African food shop".