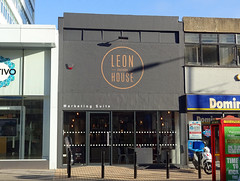 It was previously occupied by a cafe called Cafe Santa Fe photo, but this closed down some time between October 2013 and March 2014 photo.