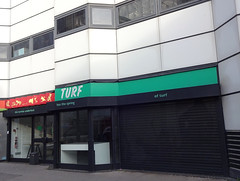 Art space in Centrale, with a frontage on Keeley Road, run by the artists' collective Turf Projects.

It was previously Turf's main premises, hosting exhibitions and events. However, in late 2017 this moved to the newly opened Croydon Arts Store in the Whitgift Centre.

As of December 2019, the Keeley Road premises are known as "Little Turf", and used as a studio and project space both by Turf studio members and for commercial hire.