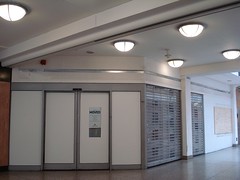 As of October 2013 the Lloyds signage has been removed from the Whitgift unit and it remains vacant. Still vacant on both levels as of December 2013 (lower level shown on this page, upper level photograph here).