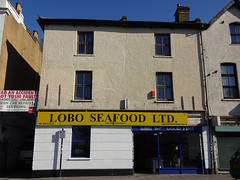 Most of the fish is frozen, though they do have a few fresh fish sold by the box (e.g. mackerel at £22/box, March 2012). There's a good selection of all kinds of fish and seafood, including whelks, mussels, squid, and octopus.

Accessibility: No step to get in, and there's a fair bit of room to move around inside.