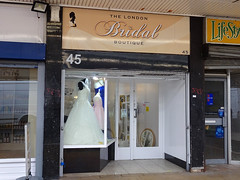 As of December 2019 it's a while since we've seen it obviously open, but there are still wedding dresses on display. It's not clear whether it has regular opening hours or operates as appointment-only.

It was previously a jewellery and fashion accessories shop called Onyx Accessories photo, which closed down at the end of March 2013.

As of February 2016 it seemed to be in the process of reopening as a wedding dress shop photo. By April 2016 this was open as the London Bridal Boutique, which was previously located in Croydon Council's Pop-Up Emporium at 86-88 Church Street.