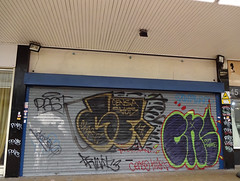 Business premises on St George's Walk, vacant as of December 2019.

As of October 2018 there was a notice up stating that Coalition Bars Ltd had applied for a premises licence to turn it into a craft beer bar photo; see also Croydon Advertiser article. According to an email from them in January 2019 they were expecting it to open in April/May 2019, though as of October 2019 there were no signs of this happening, and in December 2019 the leaseholder told us that he was intending to open an organic food shop there.

It was previously a Portuguese, Brazilian, and Angolan grocery shop called Luso photo, but this closed down some time between October 2017 and August 2018.

Until mid-2015 it was occupied by a nutritional therapists and personal training studio called My PT Studio. As of July 2012 this seemed to still be in the process of opening, but by October 2012 it was fully open. As of October 2012 the premises were occupied by two separate businesses, though they went under the same name. At the front there was a nutritional therapist, offering dietary consultations and various "shakes". At the back there was a small gym with a personal trainer and massage services. A sign on the door as of October 2012 read "Wellness Centre / Club 42 / Healthy Fast Food / Louis de Souza and Fatima Mahumudi".

Number 43 was vacant as of September 2015 photo, but as of December 2015 there was shopfitting work going on inside, with what looked like display shelves going up. Signage for a business called Luso was up by late January 2016 photo. This opened as a Portuguese, Brazilian, and Angolan grocery shop some time between mid-February and early April 2016 photo, but closed down again some time between October 2017 and August 2018.