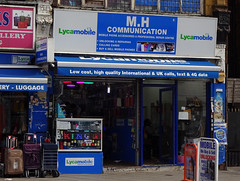 It was previously called Imran Repair Centre photo, but changed its name to MH Communication some time between June 2018 and June 2019.

This is half of what was a single shop unit until early 2017. According to a photo on Flickr, as of c. 1985 the premises were occupied by Savvides Fish Bar, according to another as of 1989 it was IFTI tobacconists and confectioners, and according to yet another as of June 1999 it was some sort of clothes shop.

By May 2012 it was a mobile phone accessories shop and repairs shop called Croydon Tech Connect photo. This changed its name to Imran Repair Centre some time in 2014.

For some time it also operated as an internet cafe photo, but by early May 2017 the unit had been split in half, with Imran Repair Centre remaining in the left-hand side purely as a phone accessories shop, and the right-hand side advertised to let photo. By July 2017 the right-hand side was occupied by a hairdressers called By The Grace Salon.