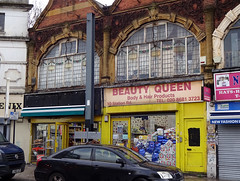 It opened some time between March and November 2017, initially just at number 12 photo, but by December 2019 it had also expanded into number 10 next door.

According to Cinema Treasures, this was the site of Croydon's first cinema, the Station Picture Hall, which opened in 1908. The cinema was renamed to West Croydon Picture Hall by 1913, and re-renamed to Kings Picture Palace by May 1914; it finally closed in 1917.

According to a photo on Flickr, as of c. 1985 number 10 was occupied by a business called Ardente Hearing Services and number 12 was a business called Able & Willing. According to another, as of 1989 number 10 was Hidden Hearing Limited (advertising "the world's tiniest hearing aids") and number 12 was Pepper Personnel Ltd. Yet another photo shows that the Hidden Hearing sign was still present in June 1999.

As of May 2012, number 10 was a beauty salon and hairdressers called Beauty Queen photo. According to the Croydon Advertiser, as of January 2013 this had been there for 15 years.

As of July 2008 (according to Google Street View), number 12 was occupied by Original Barbers, while dressmakers/fabric shop Home Sweet Home was further along the road at number 24. However, at some point these two businesses swapped over, and by May 2012 Home Sweet Home was at number 12 photo and Original Barbers was at number 24. According to their frontage as of May 2012, Home Sweet Home specialised in "quality lace and embroideries, Kente, Duku, Holland wax prints, Jacquard, Swiss voile, head ties, etc", and they had "expert dress makers on site".

By November 2017, Home Sweet Home had departed and number 12 was in use as a shop selling vegetables and Ghanaian groceries. However, the old signage remained up for a few months, and when new signage did appear it still used the name Home Sweet Home. By December 2019 this had also expanded into number 10.