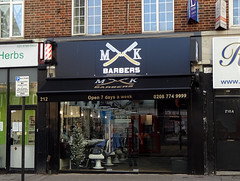 Barbers on the High Street. It opened in August or September 2019.

It was previously a tattoo and piercing studio called Rings And Things/Innocent Needle photo, but this closed down some time between April 2014 and June 2016 photo.

As of December 2016 there was a sign on the frontage indicating that a vape shop called Vape King would be opening there soon photo. This was open by mid-January 2017 photo but closed down again some time between June 2018 and February 2019.

The premises were vacant and to let as of February 2019, and still vacant as of May 2019. As of August 2019 it was being fitted out for a barber shop called M K Barbers photo, and this was open by mid-September.