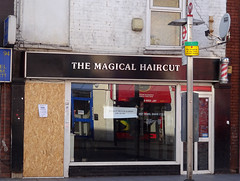 It was previously a hairdressers and barbers called The Magical Haircut photo, but at some point between September 2016 and March 2017 this moved across the road to number 97.