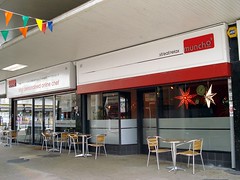 It was previously a Turkish cafe and sandwich shop called Muncho; this closed down some time between May and October 2017, though the underlying company still did office food delivery for a period of time photo of notice. However as of March 2018 the company appeared to be going into liquidation, and in September 2018 the entire block was vacated due to impending redevelopment.

Muncho was previously located in number 24 only photo, but also took over number 22 in Autumn 2012, and by March 2013 had opened the new space up as an additional dining area.

Prior to this, number 22 had been empty for some years. Although for a while it showed signage for Stancombe Radio photo, this was left over from a film set rather than reflecting an actual business.