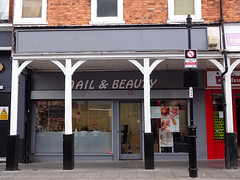 Nail bar on Surrey Street. It was previously called Jennifer Nail Studio photo, but became Nail & Beauty some time between May and October 2017.

According to a photo on Flickr, as of c.1985 the premises (along with number 36 next door) were occupied by a shop called Mr Pato Shoes.