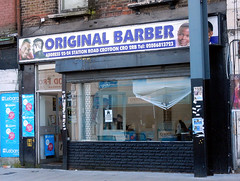 According to a photo on Flickr, at some point before 1989 this was York Insurance.