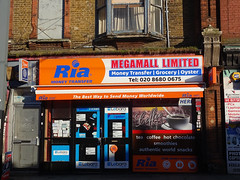 As well as shelf-stable items such as gari and bread, they also have a fridge with tubs of pre-prepared Ghanaian food (e.g. waakye, jollof rice, fish stew, etc).

By May 2012 it was a convenience store called Mega Mall photo.

As of March 2017 there was a sign in the window photo indicating it would become a cafe called Cafe 5, but this new name never materialised.