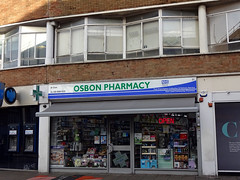 Pharmacy on George Street. It was previously called St Clare Pharmacy photo, but changed its name to Osbon Pharmacy by December 2019. According to a member of staff, the name change was because of a new owner but everything else stayed the same.

According to a photo on Flickr, as of c. 1980 the premises were occupied by a business called Fashion Tailors.

According to Google Street View, St Clare Pharmacy was there by August 2008, though at that point the frontage described it as "St Clare Chemists — Health Food Centre".