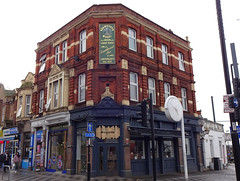 Caribbean cocktail bar on the corner of North End and Tamworth Road, near West Croydon Station. It opened in December 2019.

It was previously a pub known as Arkwrights Wheel photo. As of June 2012, it was under the name Babylon Inn photo and the bar was still in place, with handpumps on it, but this was removed in a refurb during early August 2013 photo of sign. The refurb also divided off part of the building's area, which later opened as Babylon Centre. Another part was divided off to create Croydon Hairdresser in January 2015.

It was never entirely clear whether the name of the restaurant was Babylon Inn or Babylon Buffet. The food choices included Indian, Chinese, Middle Eastern, Italian (including pizza), and burgers. They also did takeaway and delivery.

Babylon Buffet was closed down in 2015 due to food hygiene violations. As of October 2015 the premises were under new management and using the name Lotus World Buffet photo; there was also a sign on the outside saying that a Chettinadu restaurant called Karaikudi would be opening there soon photo. The first day of operation of the Chettinad restaurant was Saturday 12 December 2015. Karaikudi didn't have a printed menu as of our visit, but the options described to us included biryanis, dosas, chapati, puri, and various curries.

Although the two parts of the restaurant had different names, they were operated by the same people and there was no segregation of seating inside — whether you were ordering from the Chettinad menu or serving yourself from the buffet, you could sit anywhere.

As of late 2016, they no longer did dosas, but there was a counter at the front with various dishes (e.g. banana curry, lamb curry, fish curry, etc), and it was fine to mix and match between this counter and the world buffet.

Lotus closed down some time between May and November 2019. As of November 2019 a new bar had been installed and there was a sign photo stating that it would be opening as a Caribbean cocktail bar called Overproof Croydon. This opened on Wednesday 4 December 2019.