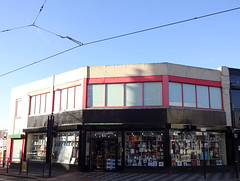 Business premises on the corner of North End and Tamworth Road, vacant as of late December 2019.

Until late 2011, this site was occupied by Forbidden Planet; however, in December 2011 they moved to 43 Church Street.

After Forbidden Planet moved out in December 2011, the premises sat vacant for a while photo. A payday loan shop called Speedy Cash photo opened some time in December (or possibly late November) 2012, but closed down again in August 2017 photo of notice.

A cookwares shop called Regal opened in November or December 2018. (As of January 2019 it didn't yet have a sign on the frontage, but according to a member of staff it was called Regal). This was definitely open when we went past in early December 2019, but by the end of the month there were sheets over the windows and old signs indicating a sale photo, suggesting that it had closed down. (It was in the same state at the end of January 2020, confirming this.)