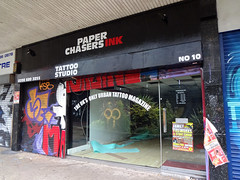 It was previously occupied by a tattoo magazine publisher called Paperchasers Ink, but like the rest of the businesses in the block this was forced to vacate in August or September 2018 due to redevelopment.

We aren't sure whether Paperchasers Ink has relocated or closed down completely; there are no clues on their website or socia media, and an email went unanswered.

According to a photo on Flickr, as of c. 1980 the premises were occupied by a "sport + leisure" shop called something along the lines of "Rickard Filby Sports Ltd".

By July 2012 it was a clothes shop called Infinitive Collections photo. Infinitive Collections opened a new branch in Centrale in July 2014. Although by early October 2014 there was a sign in the window photo stating that the shop had moved to Centrale, as of July 2015 the St George's Walk branch remained open, and a staff member at the Centrale branch told us that the St George's Walk one was their main one. However, by mid-2016 they had started the process of handing the premises over to another business, and this was complete by November 2016.

Tattoo magazine publishers Paperchasers Ink opened here in October or November 2016 as their first shopfront presence photo; the staff were working from home before that. There was a photo studio upstairs where they did shoots for the magazine, and they also offered tattooing services by appointment only.