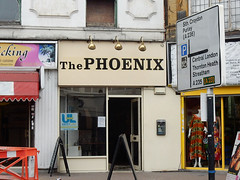 It was previously called the Gypsy Tavern photo, but in mid-August 2015 a new sign went up for The Phoenix. Not sure if there was also a change of management.

According to a photo on Flickr, it's been the Gipsy Tavern since at least c. 1985, at which point the frontage proclaimed it to be a "restaurant & wine bar". See also a photo of it in 1989.

It was still the Gipsy Tavern as of May 2012 photo, but this changed some time in mid-2014, as a new frontage with the spelling "Gypsy Tavern" was installed photo. In mid-August 2015 this was replaced with a sign for The Phoenix.