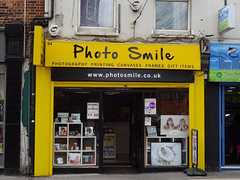 Photography studio and photo printing shop on the High Street. It opened in early June 2015.

In early June 2015 a photography studio and photo printing shop called Photo Craft opened up. It initially had a sign reading Craft Photo photo, but this was swiftly corrected to Photo Craft photo. However, by December 2015 it had changed again to PhotoSmile photo, and by August 2017 this had gained a space in the middle and become Photo Smile photo.