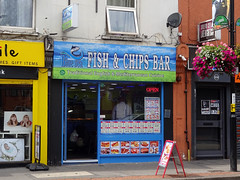 Fish & chip shop on the High Street. It opened in July or August 2017. It has a couple of tables for eat-in.

According to the frontage as of August 2017, it is halal.

It was previously a chicken, burger, and fish and chip takeaway called Chicken Shack photo (and/or possibly "Frankie's"), but this closed some time between October 2013 and April 2014.

It was then due to open photo as The Goodness, a rebranded version of Tacolisa (previously next door at 90 High Street). This apparently never got as far as having its name on the frontage, though it was certainly delivering via internet ordering for a couple of months at least. As of August 2014 both Tacolisa and The Goodness seemed to be no more, and number 92 had its windows newspapered over photo.

In late September 2014, a Chinese/Japanese takeaway called Big Spoon opened photo. Although it branded itself as a Chinese takeaway, it did quite a few Japanese dishes too. It also did home delivery, with online ordering via Deliveroo and via Just Eat. Some time between September 2016 and April 2017, this moved across the road to 103-105 High Street photo of sign, operating from the same premises as a Chinese restaurant called Wei Dao, but with a separate menu and takeaway/delivery only.