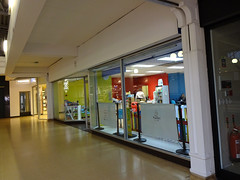 Cafe and children's soft play area on the upper level of the Whitgift Centre. It was previously located in an open area on the lower level, but moved here in December 2019. According to a member of staff in December 2019, the move was primarily because it was impossible to make the previous space secure after their opening hours, and they regularly had to clear up mess from people who'd got in the previous night.