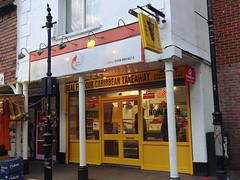 Caribbean takeaway on Surrey Street. It opened around late 2016 or early 2017.

It was previously a kebab, burger, and fish and chip takeaway called Surrey Street Kebab House photo, but this closed some time around November 2012.

By December 2012 it was a Halal butcher called Erciyes photo, which according to the Croydon Advertiser (webpage now deleted) was run by the same management as the kebab house.

By July 2013 it had become Harvest photo, a kebab, burger, and fish and chip takeaway. Some time between August 2015 and April 2016 this became Tasty Heaven, a kebab and burger takeaway that also did biryani and offered online ordering via Just Eat. This closed down again some time between April 2016 and January 2017.