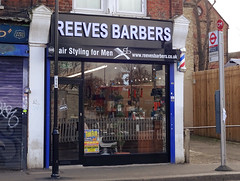 Barbers at the Reeves Corner end of Church Street. It opened some time around the start of 2018.

It was definitely vacant as of June 2014 photo.

In September 2014, signage went up for a business called DS Legal Services photo. This opened some time between October 2014 and January 2015. According to their website as of January 2016, they "collect[ed] debt, enforce[d] CCJ, repossess[ed] property [and] evict[ed] trespassers and squatters".

By March 2018, DS Legal Services had been replaced by Reeves Barbers.