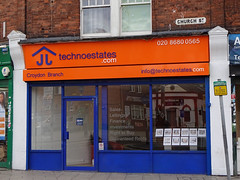 According to a photo on Flickr, as of December 1990 the premises were occupied by a business called C W Brown (Neat Homes Ltd).

By December 2011 the shop was occupied by Simman Solicitors photo, but this moved to 83 South End in June 2012; see photo of signs in window from a couple of months later. Around the start of September 2012, the shutters on the shop were decorated as part of an art project photo.

By August 2015 signage for a company called Technoestates had appeared photo, but the shutter was always down when we went past, until in October 2018 we finally caught it open. According to a manager in December 2019, Technoestates was in existence in Croydon prior to 2011, but shut down during the riots of that year; the owner then had trouble getting it up and running again so handed it over to the present management in September 2018.