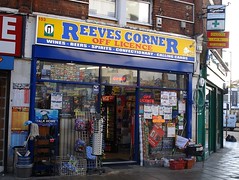 Off licence on Church Street.

As well as the usual beers/wines/spirits, soft drinks, and crisps/snacks, they also sell a few household items such as mops and buckets, children's backpacks, sunglasses, plastic toys, sewing thread, and knitting yarn/wool.

As of December 2011 this was a budget homewares shop photo also selling a small selection of knitting yarn and needles. Some time around September 2012 a sign appeared in the window photo stating that an off licence would be opening there soon, and by October 2012 this had indeed happened.

Accessibility: A small step to get in, less than kerb-height. It's all on one level once you're in, though it's quite small inside.