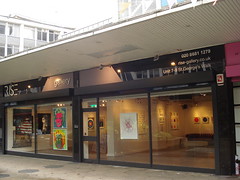 Business premises on St George's Walk, vacant as of December 2018.

It was previously occupied by an art gallery called Rise, which opened on 24 October 2014, but this was forced to move in late 2018 due to redevelopment of St George's Walk. As of December 2018 the Rise team are viewing several possible new premises around Croydon and hope to reopen in early 2019.

Judging by old signage photo revealed when the Brooklyn Big And Tall signage was taken down in 2013, at some point in the past it was home to a business called Natterjacks.

By May 2012 it was Brooklyn Big And Tall photo, a clothes shop specialising in large men's sizes, but at some point between March 2013 and September 2013 this moved a few doors down photo of sign to 23-25 High Street.

Numbers 7-9 then remained vacant until late 2014, but by early October 2014 preparations were in place for the opening of Rise Gallery, including the appearance of a mural by Gnasher Murals on the shutters. See photograph from early October 2014.