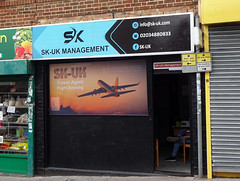 According to a member of staff in December 2019, it specialises in Middle Eastern languages such as Kurdish and Arabic.

Until at least March 2018, it was part of a hat, clothing alterations, and dry cleaning place called Liz's Fashion at numbers 4-5 photo, but this closed down some time between then and December 2018.

As of January 2019 there were signs for SK-UK Management in the window photo but it wasn't clear whether this was open yet.