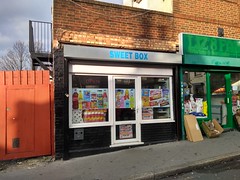 Convenience store on Mead Place, just off London Road. It opened some time between March and December 2018. It mainly sells biscuits, crisps, and soft drinks.

It was previously a barbers and hairdressers which had no name on the frontage photo, but according to a board outside in April 2014 photo was called Direct Image. The last time we definitely saw this open was in December 2015.
Existence last checked in December 2019.
Mead Place