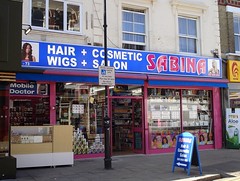 Hair and beauty product shop on Church Street. They have an extensive selection of wigs, and there's also a hairdressers on the premises.

It opened some time in July or August 2012. Judging by the typography, it seems to be connected (possibly via franchising) to other similar businesses elsewhere in London, including Sabina Hair and Cosmetics in Thornton Heath.

The premises were previously occupied by a furniture shop called Discount Furniture Store photo, though by January 2012 this had moved across the road and been renamed to Homestyle.