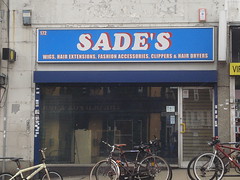 Business premises a couple of doors down from West Croydon Station.

It was previously a hair supplies shop called Sade's photo, but this closed some time in 2013 or early 2014. As of August 2014 it had been permanently shuttered for several months. As of October 2014, the shutters have come up, though it still looks abandoned inside.

According to Ward's and Kent's street directories, in the 1930s and 1950s the premises were occupied by John Bright outfitters. The London Tramways website has a photo of the shopfront around this time.