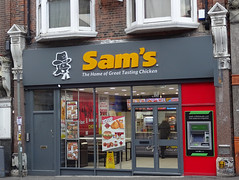 By May 2012 it was a kebab restaurant called Bodrum. This closed some time between November 2014 and March 2015 photo, but as of April 2015 it looked like the closure might only be temporary, and it was open again by May 2015. Shortly after this, the buffet station was removed. It closed again some time between May 2016 and July 2016 photo of stripped-out interior.

The premises were still vacant as of late November 2016, but with a sign up stating that a branch of Sam's Chicken would be opening there soon photo. Sam's was open by early January 2017 photo.