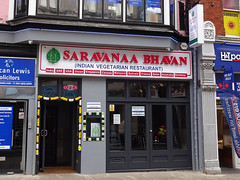 They also do takeaway, but they don't take orders over the phone; you have to place your order in person at the restaurant.

Accessibility: No steps to get in. Toilets are in the basement, down a flight of stairs with a hard-to-grasp handrail on both sides.