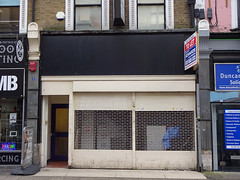 Part of the building was previously occupied by Demon Recruitment, but by October 2017 this had moved to Weatherill House, 23 Whitestone Way, CR0 4WF.

The premises were previously occupied by Rio pawnbrokers photo, then vacant for a while photo before Demon moved in.

Demon was previously based on the second floor of number 43 photo, but moved to number 20 some time in mid-2012. (The ground floor shopfront remained vacant; Demon was either further back or on one of the upper floors.)