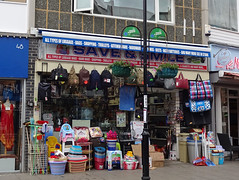 Save And Smile, 46 Church Street

Save And Smile, 46 Church Street

According to a photo on Flickr, as of c. 1985 the premises were occupied by a branch of the South of England Building Society.

By March 2012 it was an Age UK charity shop photo, stocking clothes and books. However, this closed down some time between April and August 2015 photo.

A bag and homewares shop opened some time between August and December 2015. As of early December 2015 there was no name on the frontage, just a blank space, and it still had no name as of February 2016 photo. By May 2017 it had acquired the name of Save & Smile photo.