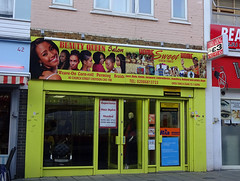 The hairdresser opened some time between December 2015 and May 2016, initially sharing the premises with a dressmaker called Home Sweet Home; however, by June 2018 the latter had departed.

By December 2019 the space previously occupied by Home Sweet Home had been taken over by a Western Union money transfer kiosk.

The hairdresser has another branch at 10 Station Road in West Croydon.

According to a photo on Flickr, as of c. 1985 the premises were occupied by a shop called Discount Fashions.

According to another photo on Flickr, by December 1990 it was a clothes shop called Fiction. This remained in place for several years photo from January 2012. As of July 2012, the frontage advertised men's, women's, and children's clothes (including school uniforms), and a board outside photo noted that they had large men's sizes (up to 6XL). Fiction finally closed down some time between April and December 2015.

A hairdresser and dressmaker opened up some time between December 2015 and May 2016. As of May 2016 there was still no sign on the frontage photo, but by June 2016 it had a sign reading Beauty Queen Salon on one side and Home Sweet Home (African Fabrics) on the other. These seemed to be additional branches of the businesses of the same names located at number 12 and number 10 on Station Road in West Croydon.

By June 2018, Home Sweet Home had departed its share of the Church Street premises, and its Station Road premises had become a grocery shop.